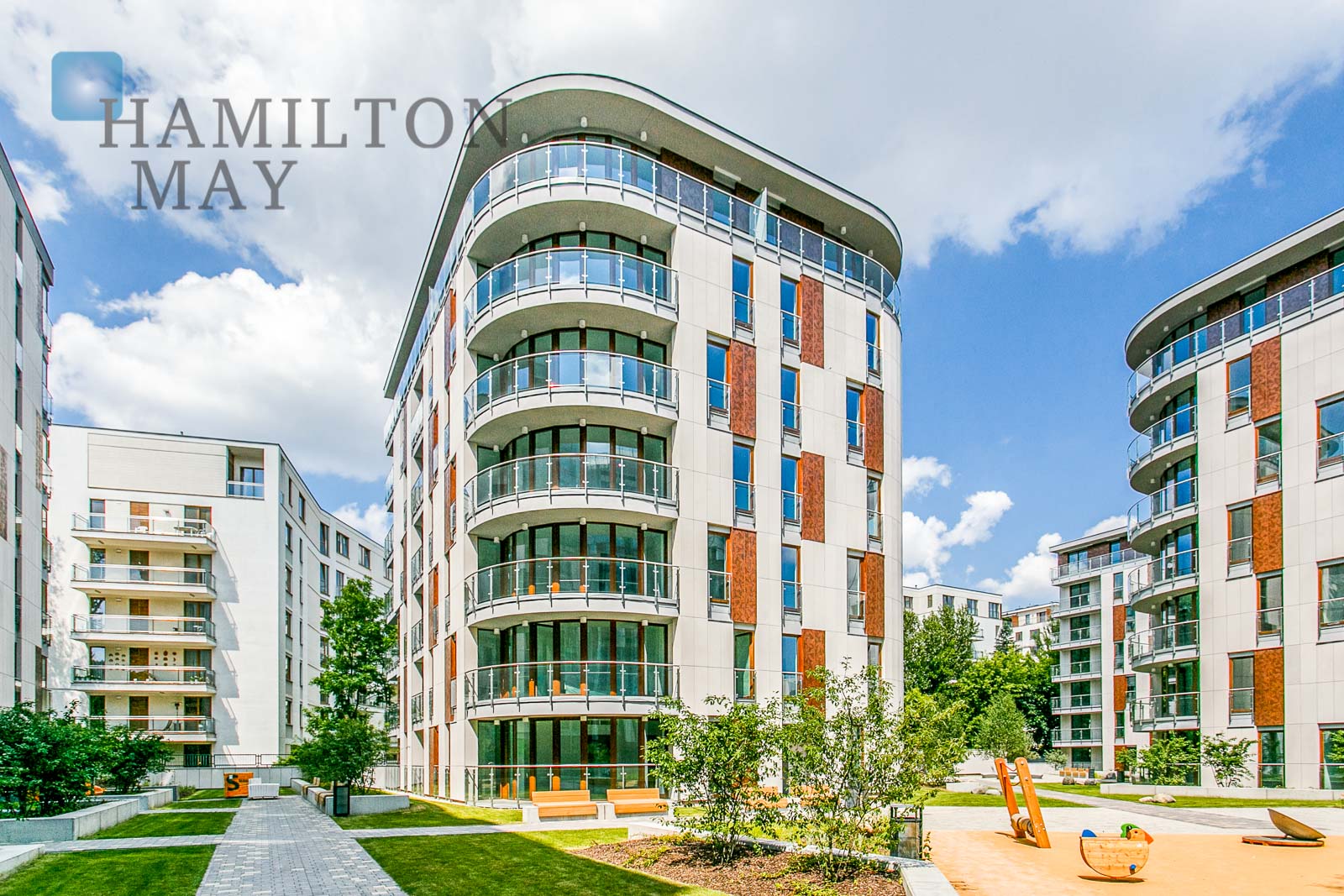 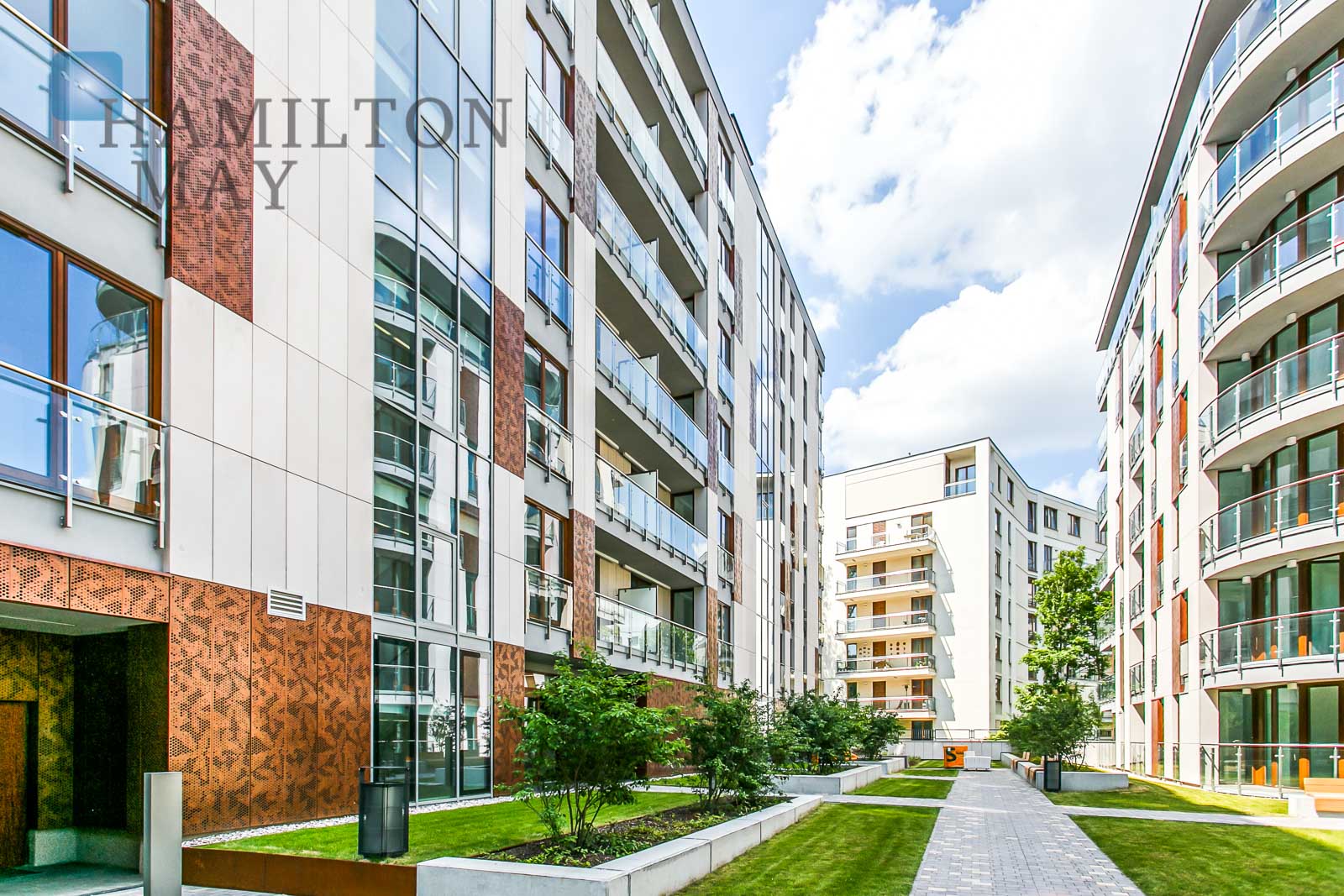 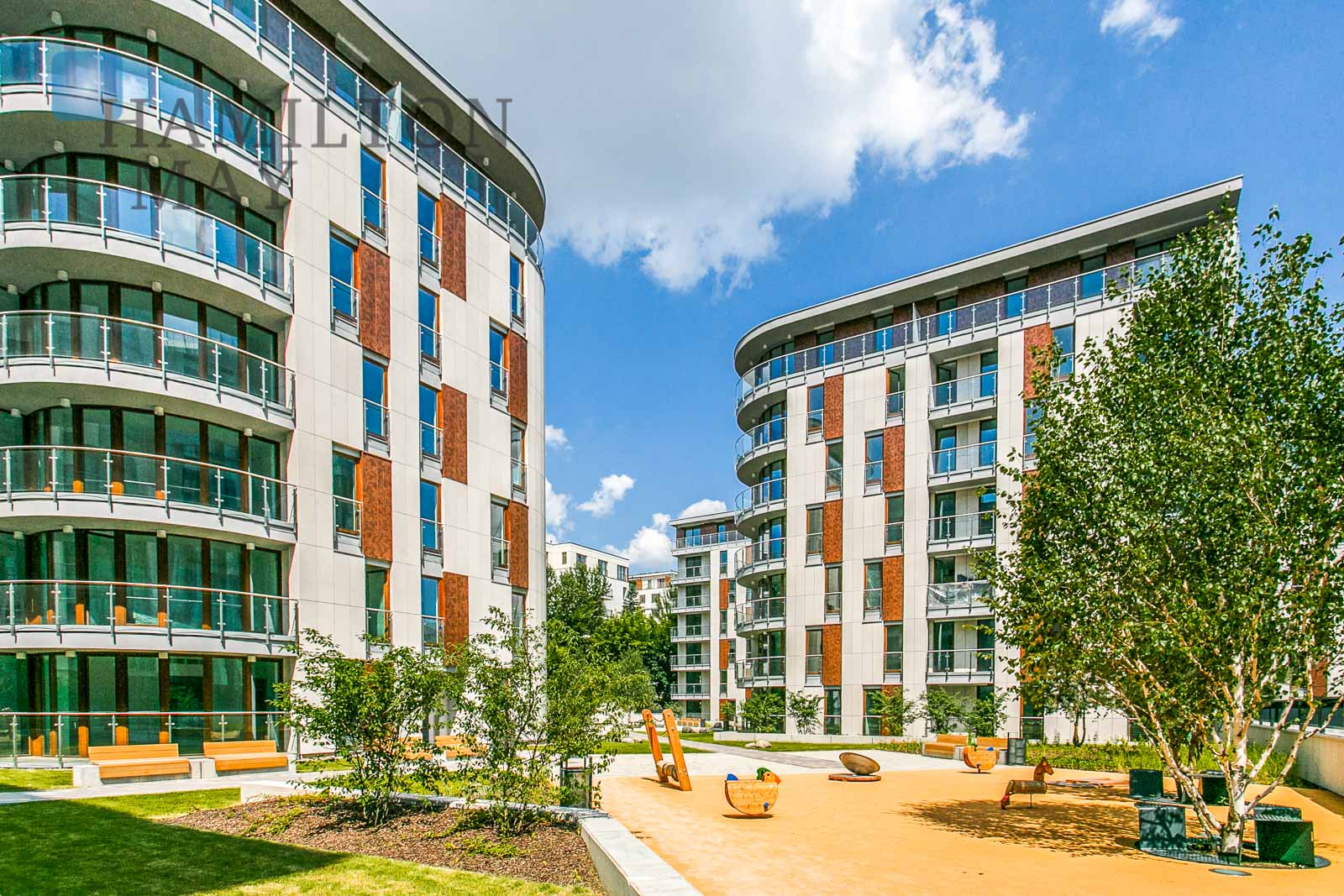 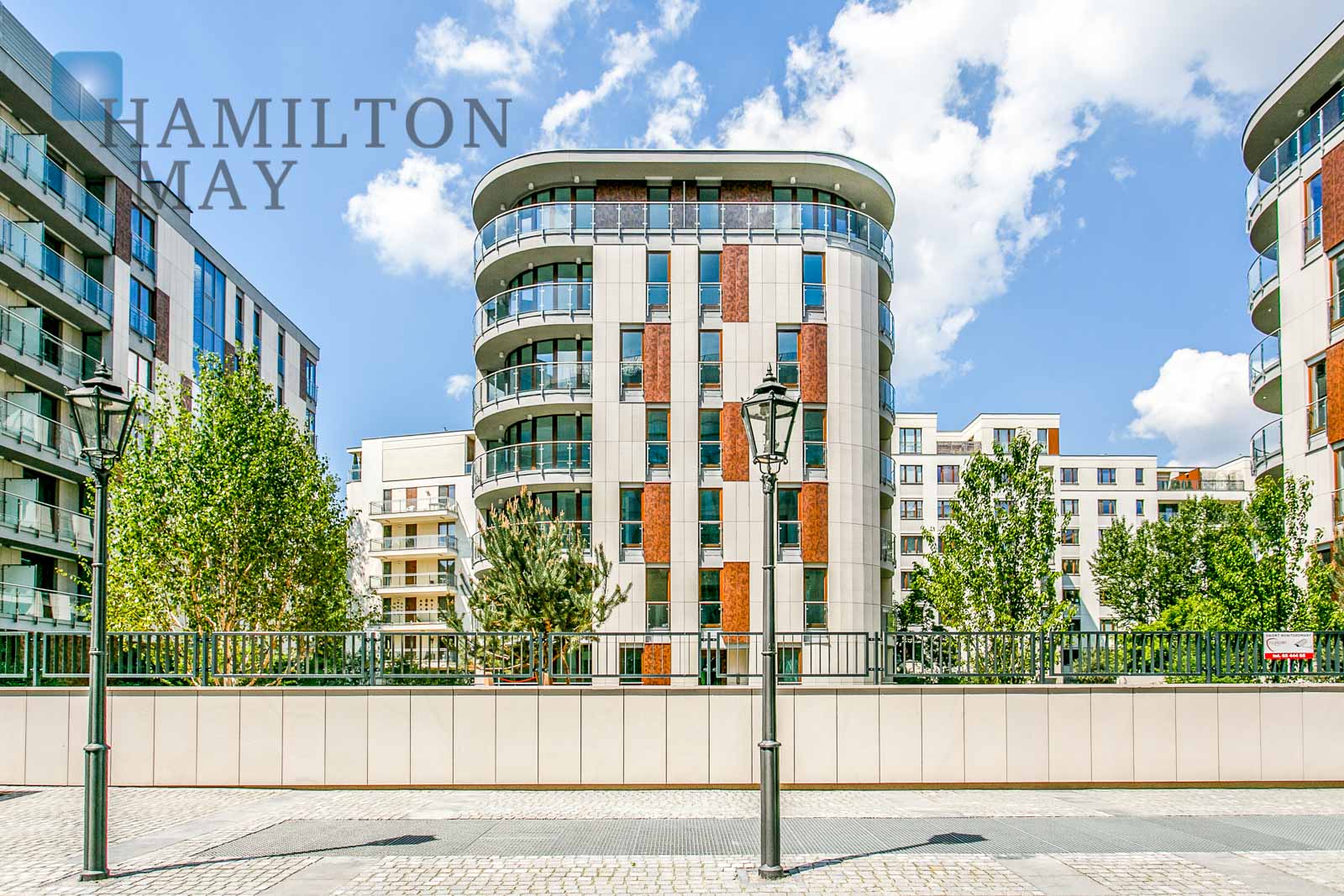 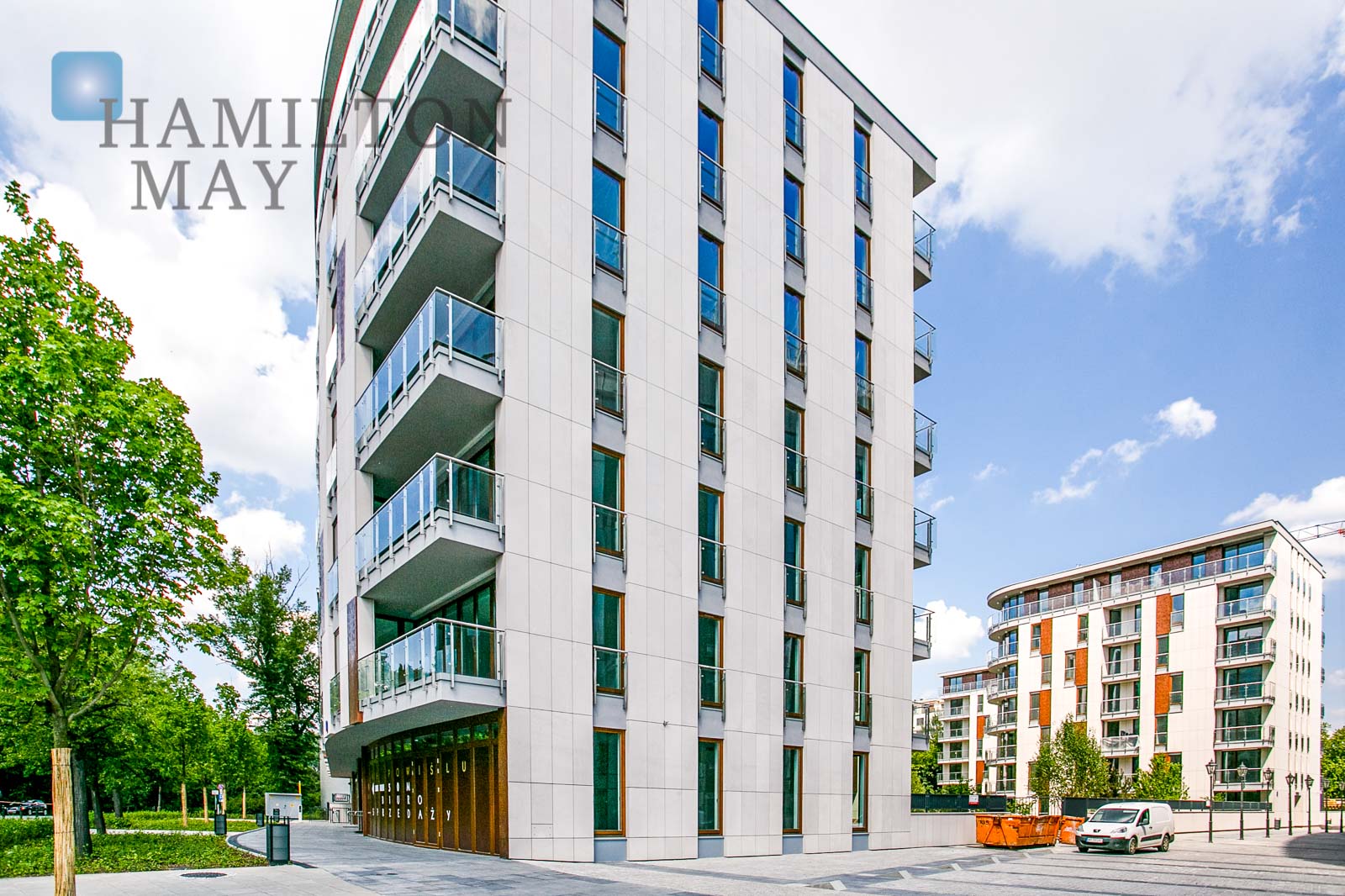 Hamilton May presents the luxurious Na Powislu apartment complex, a unique place, located in the very heart of Warsaw.

Na Powiślu apartments makes you rediscover the atmosphere of old, elegant Warsaw. The five cosy tenements, designed by Kuryłowicz & Associates, one of the best Polish architectural studios, strike the chords of noble art déco and Warsaw modernism, enveloped in distinct forms and a perfect finish. The investment is surrounded by hedgerows discreetly setting it apart from the surroundings. An internal garden has been established between them – a green enclave, not accessible to road traffic, with mood-setting lighting along alleyways and a safe playground for children.

The main entrance to the estate is in tenement house A1, off ul. Kruczkowskiego. The entry hall and reception interior design includes materials of the highest class: precious types of stone, wood and metals. The stylish elegance of the common areas is dictated by the exclusive decorative elements, as well as skylight ceilings, granite and wood veneer in lifts. The 139 Na Powiślu apartments are intended for discerning customers who, in their real property investments, are seeking comfort, modern solutions and a distinctive character of the building. The three-metre-high interiors are lit up by large wooden windows. A central, individually controlled air-conditioning system ensure an optimal temperature at all times of the year. Modern technologies guard the residents sense of safety and comfort: the building management system (BMS), own water treatment station, monitoring, and video entry phones.

Old Warsaw flourished between the Vistula and the Royal Route – that is where the Royal Castle, the University, and the palaces of the aristocracy were built, with Nowy Świat and the riverside boulevards a traditional spot for Sunday strolls. Despite the passage of time, the heart of the city still beats between the river and the Royal Route: exclusive boutiques and restaurants are opening up in Nowy Świat and Plac Trzech Krzyży, the embankment is home to financial institutions, government offices and embassies, and the most interesting modern buildings are springing up, such as Warsaw’s University library or the Copernicus Science Centre. Such a prestigious neighbourhood, together with a modernised infrastructure, draws luxury housing projects to Na Powiślu. Today, it is one of the most coveted locations in Warsaw.

On the corner of ul. Kruczkowskiego and Ludna, amongst three parks, the Na Powiślu investment has been implemented. Within a radius of several hundred metres, so close that it is all accessible by foot, one will easily find nurseries, surgeries shops, and the most popular Warsaw restaurants and cafés. Convenient public transport access to other parts of the city is provided by buses and trams, and in a quarter of an hour you can reach Powiśle on the second underground line. Everything needed for a comfortable life is here.

The building standards consists in 7 level buildings, with two to five apartments per floor. Apartments are available in different configurations and sizes - from one bedroom to 4 bedroom luxury apartments (94 - 139 m2). The underground of each building is a common space for all residence of the building consisting of: parking spaces, storage rooms, utility room and maintenance rooms.

Hamilton May kindly invites you to contact our office for more information.